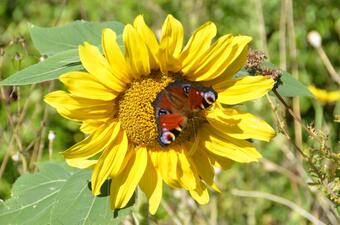 The allotments are bounded by a nature reserve, Burgess Field, a Site of Special Scientific Interest, Port Meadow, and the canal/railway wildlife corridor, which backs onto the Trap Ground Reed Beds. In other words, what is a horticultural plantation to us is a marvellous free cafeteria to some of our neighbours. Although it is fashionable to set apart parcels of cultivable land for wildlife, in our case it is hardly a requisite, and our priority is finding ways to discourage the species that cause most damage.

These are the only pests which the City Council has a statutory duty to control. Rats will always be present but they can be a particular pest in the winter months when they take refuge in sheds, infest compost heaps and savage root crops like parsnips and beetroot. If members are concerned they should report the nature of the infestation to the Committee, and visits by the Council Pest Control Officer will be arranged. Some members bring household and kitchen waste to their compost heaps. This ought to be put only in sealed compost bins, or directly buried in trenches.

Local authorities are supposed to control rabbits but are deterred from doing so by the sentimentality of members of the public. They are our most persistent pests and can wipe out entire rows of crops. They can be deterred by locating and digging out warrens, blocking burrows under sheds, and preventing thickets of undergrowth and briar patches from forming. Remember Brer Rabbit? Rabbit netting is of limited efficacy unless firmly anchored and buried in the ground. Also the Association keeps some live rabbit traps, which may be borrowed by members.

The two worst offenders are pigeons and pheasants. Pigeons will strip any unprotected brassicas and peas during the growing season. Pheasants will work their way along rows of freshly sown peas and beans. Without holding shooting parties the only solution is lots of firmly pegged netting.

It is against the law to disturb badgers. Unfortunately they are abundant, and there are setts all along the railway embankment. They, too, are particularly fond of sweet corn. A determined badger can bulldoze its way through almost any protection. Generally their damage is limited to digging up holes in plots and paths either to search out worms or excavate latrines.

Since the allotments were surrounded by stock fencing, incursions by deer seem to be a thing of the past.

There are plenty of mice and voles around, some years in vast numbers. They are an obvious nuisance in winter and spring. If large seeds like peas and beans go missing mysteriously it is probably mice to blame. A particularly irritating habit is digging down alongside broad bean seedlings to chew up the bean beneath, thus decapitating the plant. There are lots of old gardeners’ nostrums like dipping seeds in paraffin before sowing. I have tried this on plants left in cold frames to over-winter. The mice got in and chewed the lot within forty eight hours. The only answer is not to plant out pot-raised plants until they are quite tall and the beans have begun to rot, plant them deep and preferably through slits in plastic mulch. And keep a few in reserve; you will always lose a few plants.

Finally we have quite a few goodies around though you are lucky if you spot them during the day. We have both weasels and stoats, particularly along the railway embankment and there are always a few foxes which can be amazingly tame. The year we allowed bottle diggers to renovate abandoned plots, a pair of them developed a taste for hand-served sandwiches. As their normal diet has become the contents of black bin bags rather than mice and rabbits their contribution to our welfare has been lamentable. Perhaps the introduction of wheelie bins will help them return to a healthy organic diet.