About the allotment site 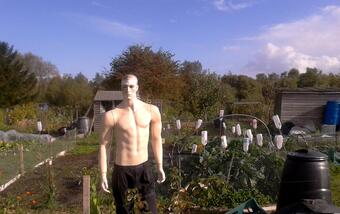 "Bring it on!" by Florence Rossignol

In common with other allotments, the site was used as a municipal refuse tip mainly prior to the 1914-1918 war, but part of the site was still tipped in the 1950s. Garden soil brought in horse-drawn carts from various sites in Oxford was used to cap the tip, but the ground still contains scraps of debris and associated pollutants typical of urban soils.

The site has seen significant changes since the 1939-1945 war. These include a huge growth in the varieties of crops grown, the fact that allotmenting was almost exclusively a male hobby after the war, the cost of renting a plot - less than £1 a year in the 1940s - and the fact that right up to the 1960s, there was never a weed on the site. Plot-holders were ejected if their plots were not immaculately maintained. One thing that has not changed is animal and bird life eating our crops. Rabbits, pheasants, pigeons and even rats were very common in the old days. As recently as 25 years ago, cattle wandering onto the allotments from Port Meadow were a constant problem.

There are now around 180 plots and half-plots on the site. A standard plot is traditionally 11 poles - an ancient measure probably only used in allotments today.

There is no mains water on the site but we do have wells. These are between two and three metres deep. Not every plot has a well, but all wells are for the collective use of plot-holders.